Mike Van Cleven and Thierry Sarasyn enjoy motorcycle riding in a different way. Although both men have known each other for years, they only recently rode together for the first time, as their paths crossed in Southern Morocco.

Mike and Thierry have worked in the motorcycle industry for most of their professional career. During the World Press Launch of Bridgestone’s A41 Adventure tyre in Ouarzazate, they were offered a chance to ride together. 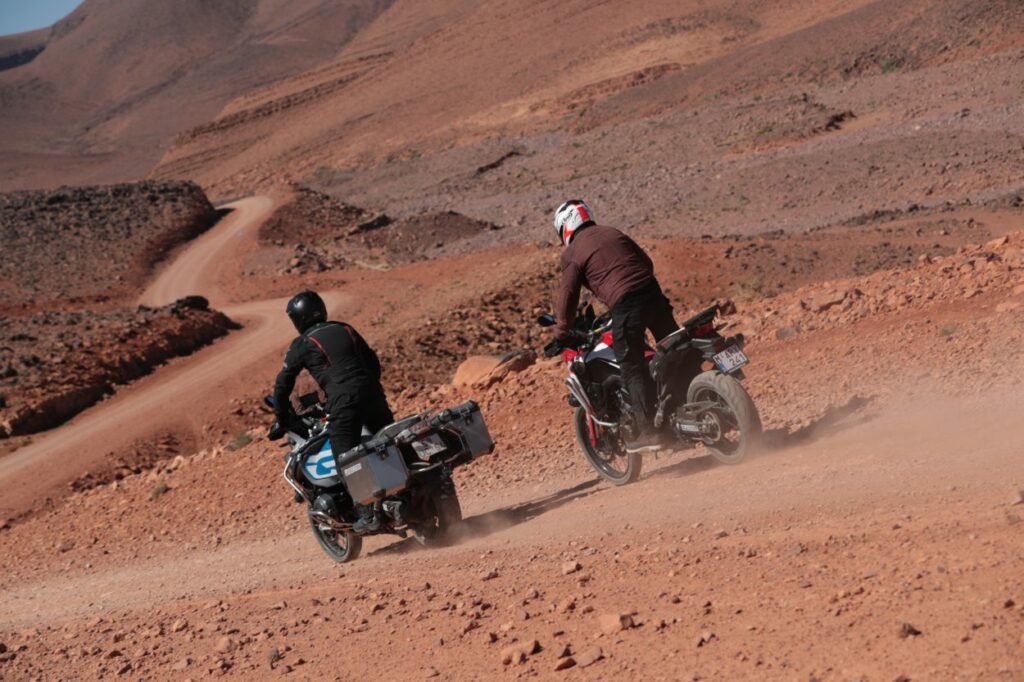 “I’ve been riding motorbikes since I was 18 years old,” Mike says. “I bought my first BMW R1200GS a couple of years ago and that gave me my first real taste of motorcycle adventure. Owning an adventure motorcycle makes me want to travel the world. Literally. I really want to ride a motorbike around the globe.”

Riding on the North-African roads near Ouarzazate and entering the rough trails, gave him a taste of what part of that trip around the world could feel like. Morocco’s roads are better than what most people expect, the trails are well maintained and the scenery in this part of the kingdom is breathtaking

Thierry has been on a motorcycle since he was 9. “Which is about 42 years ago now,” he laughs. “However, I hopped on a road bike for the first time, much later. I must have been around 30 or so. Before that, I only rode MX bikes as fast as I could. I found that switching from an off-road career to riding road bikes wasn’t all that hard. The other way around is usually much more difficult. But I still love off road. That’s why adventure riding is very appealing to me. I need that occasional bump and a little wheelie every now and then to feel happy. But it also allows me to ride just about everywhere.”

Owning an adventure motorcycle makes me want to travel the world. Literally. 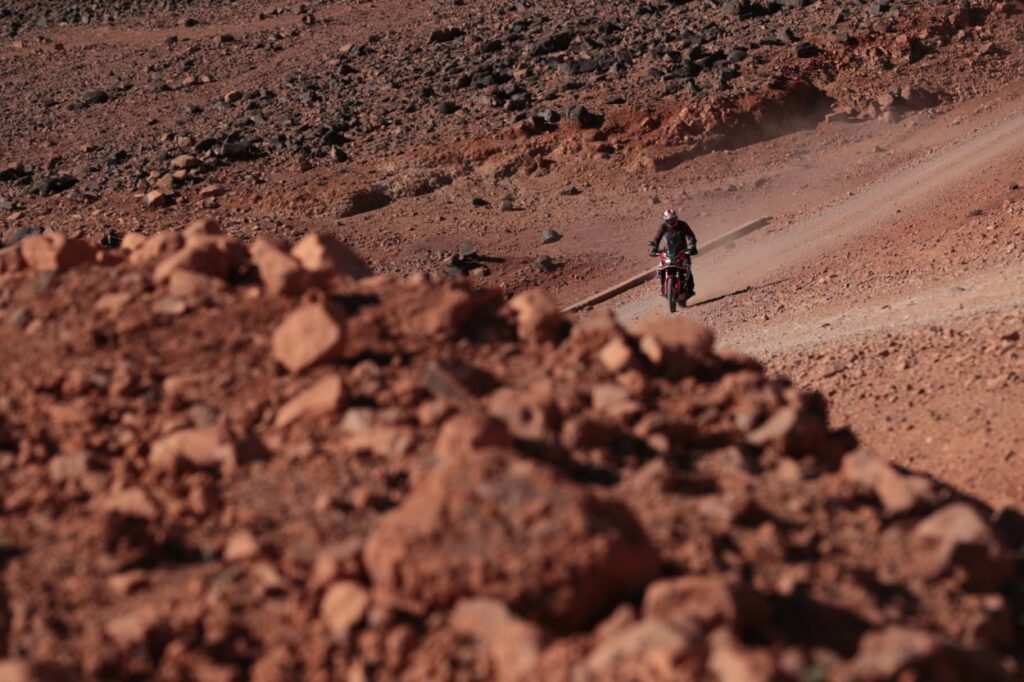 That adventurous side of motorcycling is what drew Mike to his GS in the first place. “People buy motorcycles for different reasons”, he says. “Some of them just buy it for commuting, others to fulfill their need for speed and more and more people are attracted to adventure riding. Personally, I think adventure riding is part of a lifestyle. And adventure bikes make you want to ride more often and cover more distance. Since I have the GS, I hop on it and just a few hours later, I’m in Paris. Sure, you can use it as a touring bike; just put up the windscreen, activate cruise control and use the heated grips. But it’s more than that.”

“My other motorcycles are naked bikes, and they don’t provoke the same feelings. They don’t make me want to travel. The GS does. Everybody says this is the motorcycle to travel the world. Well, in my opinion, it is. In a certain way, I fell for the marketing trap that comes with this bike. But only because I believe it’s true! I liked the idea of having a bike that could potentially take me anywhere. And now that I have it, it really makes me want to do all those things. I was off bikes for about 10 years. Because I had too much work. Often enough I was around bikes, but I had no time to jump on one. This bike just makes me want to ride and I even integrate it into my working. That’s just great.” 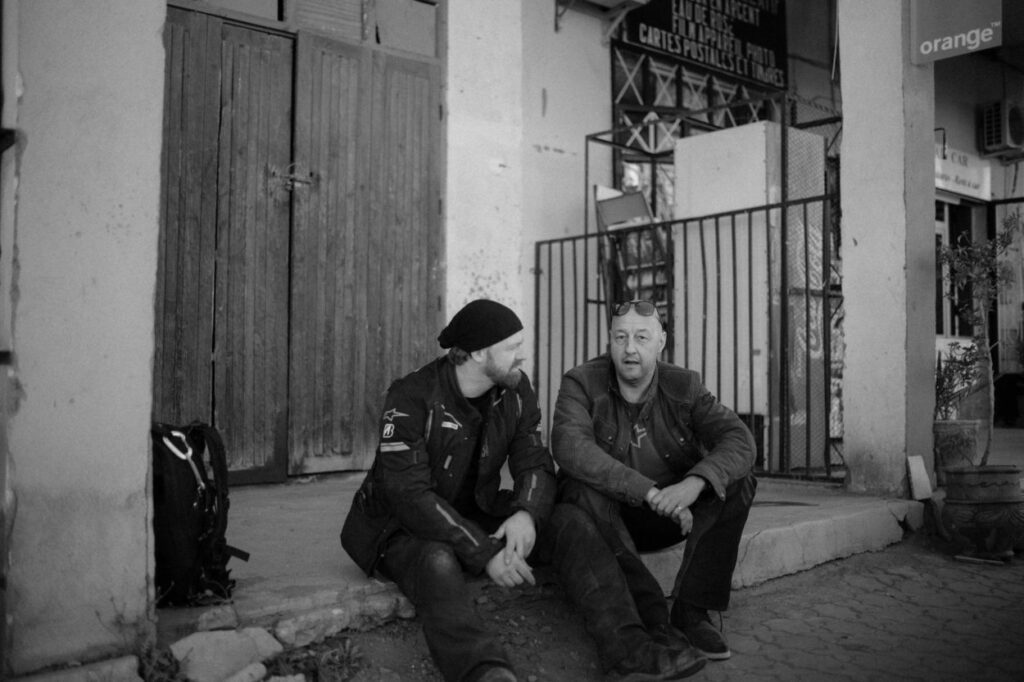 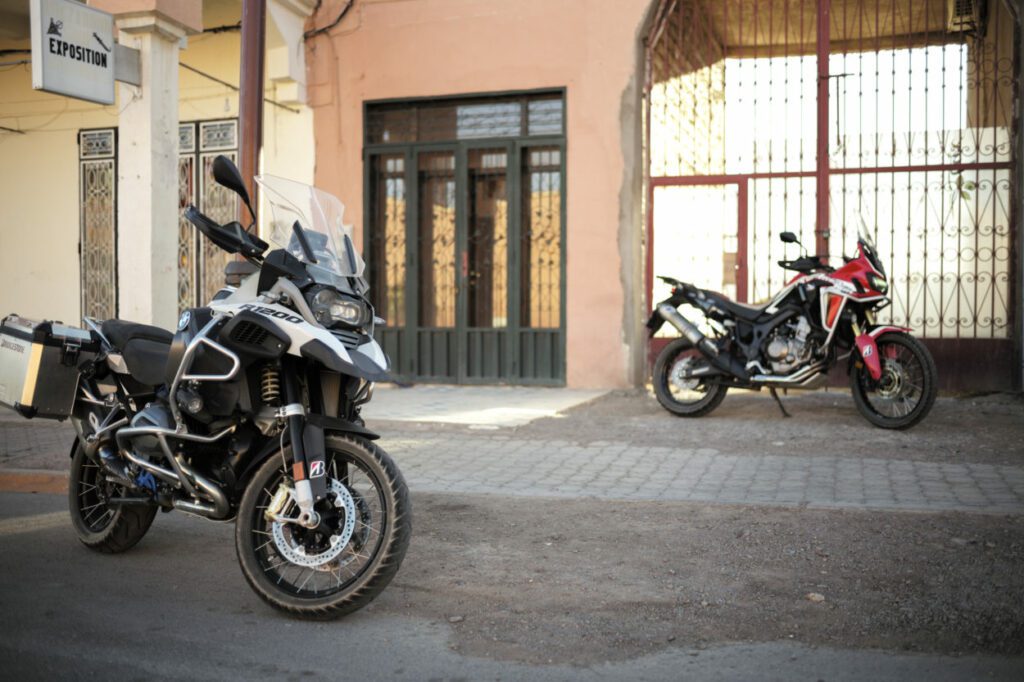 The pure way of traveling

For Thierry, it’s not so hard to integrate motorcycles in his daily routine. As a motorcycle journalist and publisher of different motorcycle related media, he is on bikes all the time, often pushing them to the limits. “But limits on an adventure bike are not about speed”, he reflects. “They are about distance, the surface you ride on, the time you spend in the saddle and the destinations you choose. I’ve been riding the Honda CRF1000L Africa Twin for the past two years and it brought me to the North Cape and to the African desert. Although you could do these trips on most road bikes, doing them on an adventure bike just gives you that extra edge. You know that you can literally take the roads less traveled to get to where you want to go. There’s always a challenge behind the next corner. And for me, there is no adventure without a challenge. If everything is planned and calculated, it’s not an adventure.”

But limits on an adventure bike are not about speed. They are about distance, the surface you ride on, the time you spend in the saddle and the destinations you choose.

“Travelling on a motorbike is one of the purest ways of traveling. You go from one place to another without being surround by steel. Just like people have always traveled. Except for the last century. Modern traveling means you are in a car, plane, bus, train or boat. None of those provoke the same feelings as a motorbike does. I’m with Mike on that part. Adventure bikes are about freedom and going anywhere you want. And sometimes just a little bit further.” 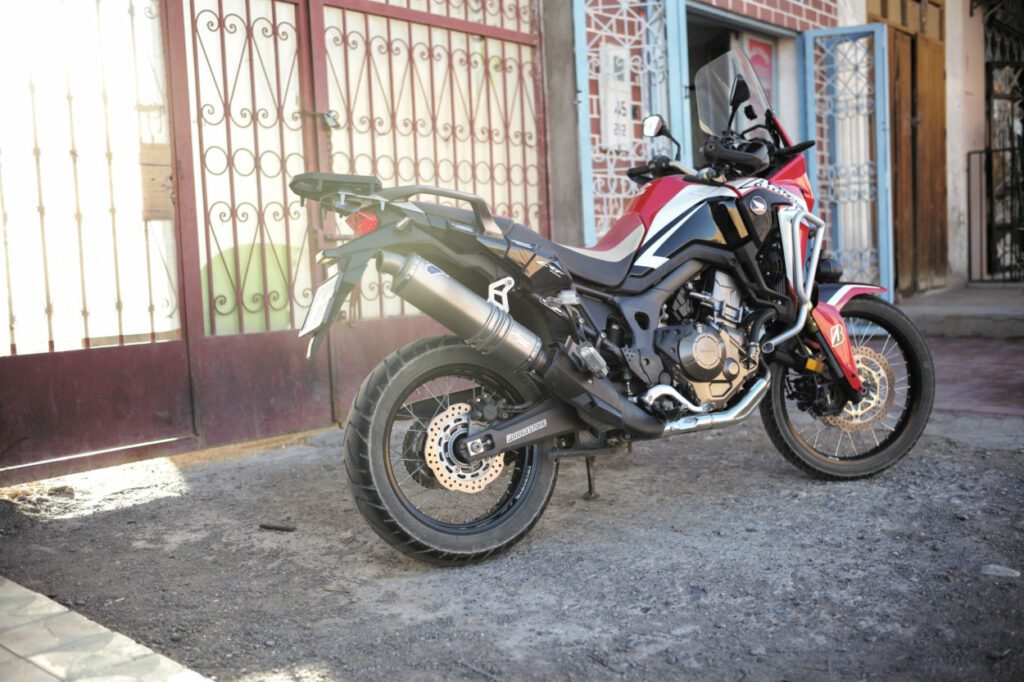 Connected to the road

Which is what brought our two adventure riders to Morocco. During the Bridgestone World Press Launch, they had a chance to ride the bike they’ve been riding for two years, but this time on Bridgestone’s new A41 tyres. When asked if he felt like this tyre made a difference on the bike he knows very well, Mike was clear. “My GS is equipped with the A40 predecessor. I’ve always been happy with the tyre, but with the A41 I feel I get a confidence boost. Because it’s easier to reach bigger lean angles in the corner. And I feel there is more grip. At low speeds, there is not that much difference, but as you go faster, you feel more connected to the road. I changed the original tyres that were on my GS to Bridgestone A40’s and that was a big step forward. But riding with the A41 I felt like this was just as big an improvement.”

“I agree with Mike” Thierry adds. “I’ve tested a number of different tyres on the Africa Twin. To my feeling the A41 tops any tyre we have tested so far. The way it improves the handling of the bike is impressive. And it’s more versatile than I expected. On road, it’s just as good as a high-level touring tyre. But it has a quite some off-road capabilities too. We blasted through the gravel roads in the pre-Atlas at ridiculous speeds. The grip was amazing.”

Which could open some possibilities for both riders? Mike wants to travel the world. Thierry has been planning to cross Chili from North to South for quite some time now. They might be able to find a compromise and work something out. In any case, it looks like they’ve already decided on the tyre. 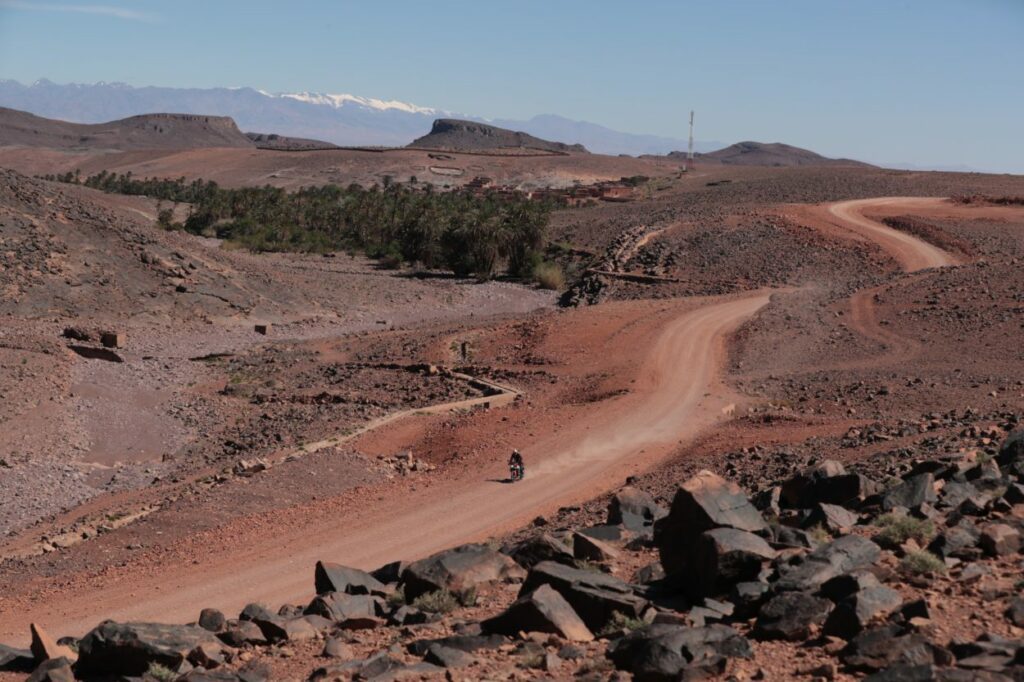 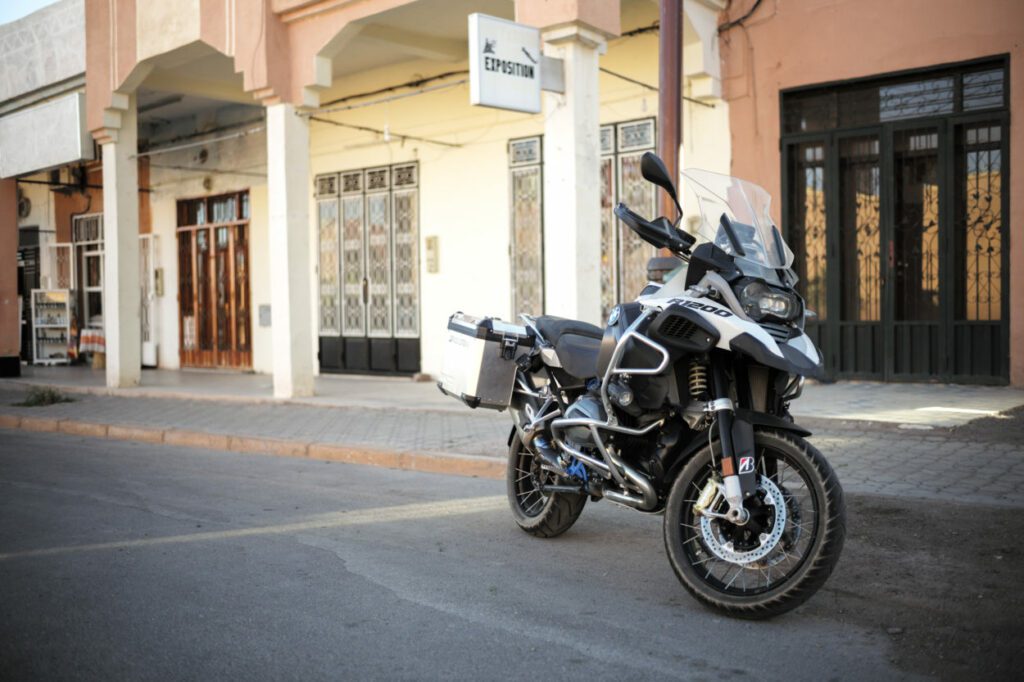 The factory Suzuki team – the reigning champion and winner of the 2019 edition of the Bol d’Or – won a brilliant victory at...
Read more
Motorcycle

There is no doubt that history contains many magnificent motorcycling moments. Perhaps you are now spontaneously thinking of a specific moment. In our blog...
Read more
People of Bridgestone

The Japanese Honda team won the 12 Hours of Estoril after a crazy 12 hours on the track and a suspenseful finish. F.C.C. TSR...
Read more
- Advertisment -