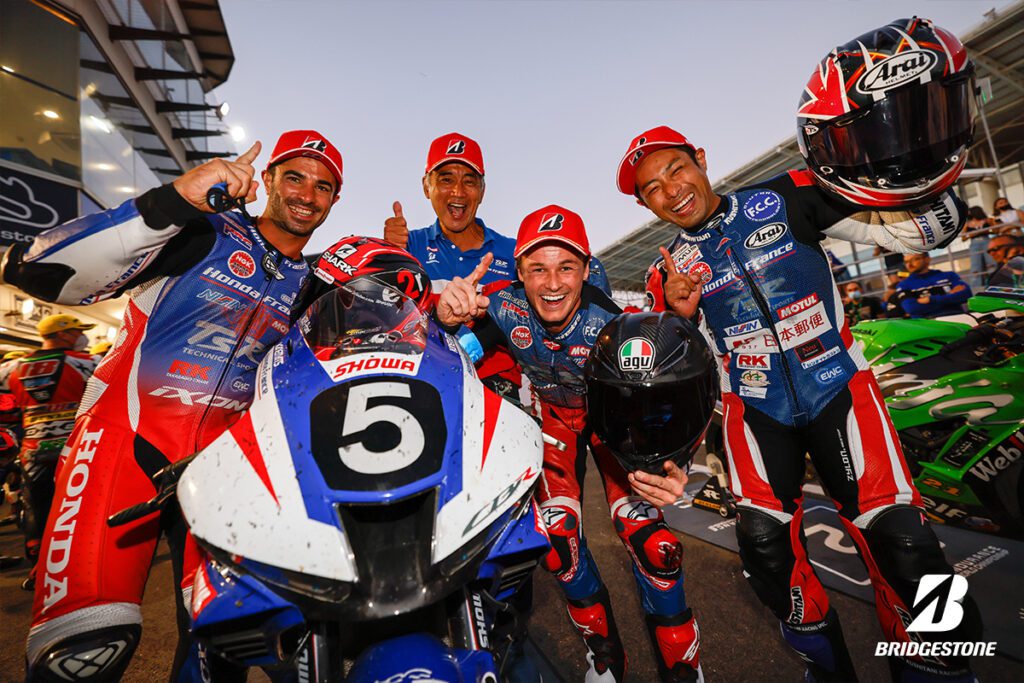 The Japanese Honda team won the 12 Hours of Estoril after a crazy 12 hours on the track and a suspenseful finish. F.C.C. TSR Honda France were one lap ahead of Webike SRC Kawasaki France Trickstar and BMW Motorrad World Endurance Team. F.C.C. TSR Honda France’s win is the second consecutive victory for a Bridgestone supported team.

F.C.C. TSR Honda France won after an incredible race with an edge-of-seat final half-hour. Josh Hook, Yuki Takahashi and Mike di Meglio came in ahead of the BMW Motorrad World Endurance Team. There was less than a second between the latter two teams.

12 crazy hours
Endurance fans won’t forget the 2021 12 Hours of Estoril in a hurry. The favourites were in the lead at the start before events turned things upside down. On a very hot track and under pressure from their rivals, the leaders crashed one after another. Race leaders BMW Motorrad World Endurance Team, Yoshimura SERT Motul and then YART–Yamaha Official EWC Team crashed before they had got halfway through the race. Towards the end of the race, when Webike SRC Kawasaki France Trickstar seemed to be firmly installed in the lead, they ran out of fuel and were thereby deprived of a win 1hr30 from the finish.

Of the leading teams who were unlucky during the race, YART–Yamaha Official EWC Team finished 10th after their crash.

Yoshimura SERT Motul finished 17th. A second crash prevented the Suzuki team from returning to the leading pack. Xavier Simeon in the saddle of the factory Suzuki collided with Morgan Berchet (Tati Team Beringer Racing) as a rider lagging behind was approaching.

Morgan Berchet, who went to give a helping hand to Xavier Simeon, stunned by his fall, was awarded the Anthony Delhalle EWC Spirit Trophy for his gesture.

The next FIM EWC race is the Bol d’Or on 18 and 19 September on the Paul Ricard circuit.

The new Franco-Japanese alliance Yoshimura SERT Motul clinched a victory in their first outing at the 24 Heures Motos, pushing the Bridgestone tyres to...
Read more
Motorcycle

Racing season is just around the corner. How exciting is that? In order to bring you up to speed about the calendar, the races...
Read more
People of Bridgestone

In light of International Women’s Day on Monday, 8 March, we would like to put our female ambassadors in the spotlight. Their stories and adventures...
Read more
- Advertisment -