Riding the infamous Route 66 is a dream for many motorcyclists. Just like many dreams, it’s not easy to achieve. However, there is a little known alternative for the world’s most legendary road and it’s a lot closer to home. Crossing the Iberic Peninsula from North to South, de Ruta de la Plata can be considered the Spanish Route 66. 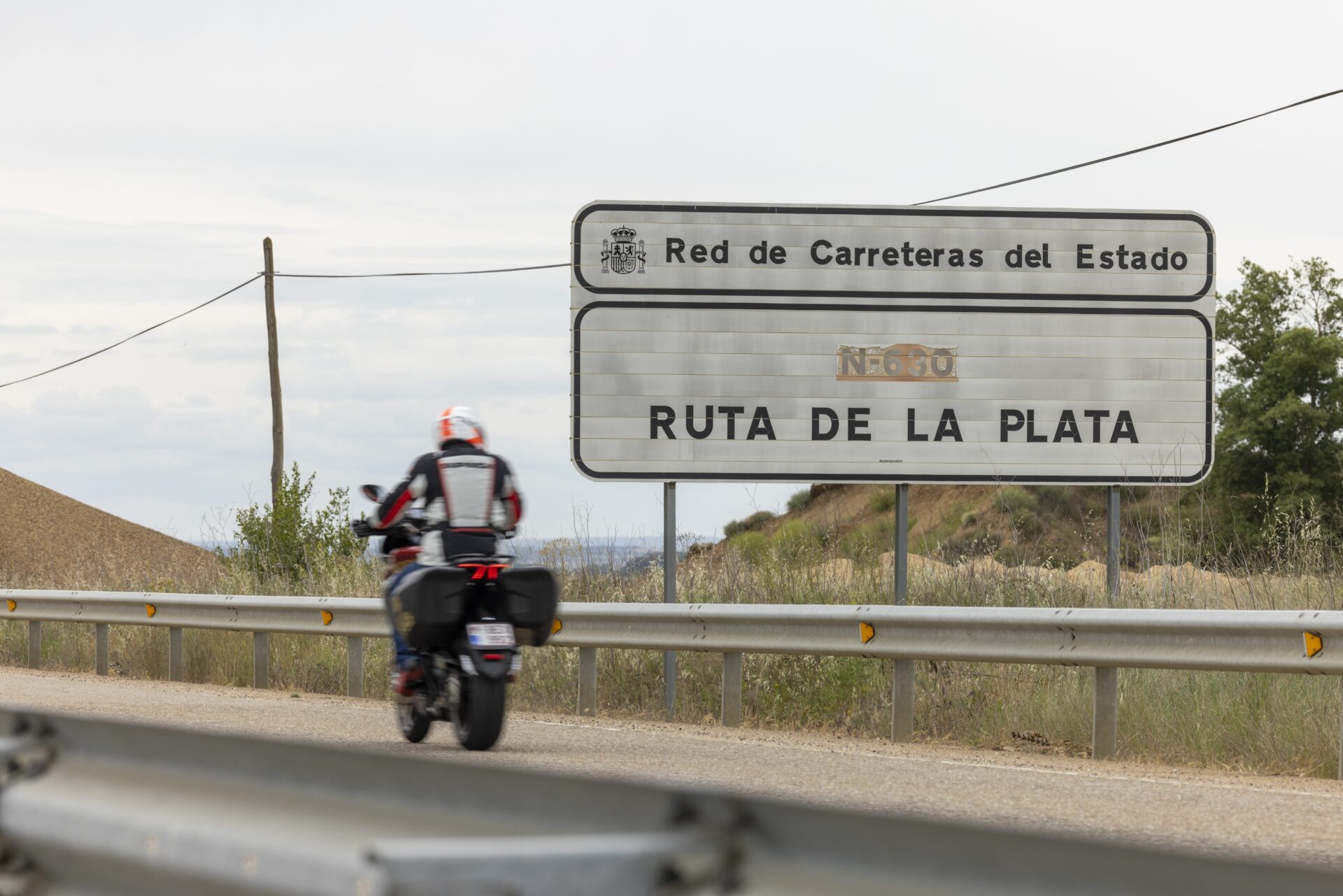 La Ruta de la Plata is a modern route based on an old Roman road, although its name comes from Arabic and refers to the kind of surface (balata, a paved road) and not to the transport of silver as often thought. It connected some of the largest cities in ancient Hispania and was also used to spread Roman culture. It was supplied with infrastructures which are now important remains along the route and continued to play a major role in the communication networks of the Iberian Peninsula in the Middle Ages, during the centuries when Muslims and Christians shared (or disputed) the land, economy, and culture; and ever since then.

A motorcycle route with a history

The route travels through four regions and seven provinces on a north-south axis 1000 kilometers long and covering over 100,000 square kilometers. Travelers can enjoy viewing numerous examples of all the cultures that have left their traces in the Iberian Peninsula: from the Roman world to Baroque Seville, including the Arab legacy, Romanesque (which reaches its greatest splendor in Zamora), Gothic architecture, etc.

Additionally, thanks to its route and infrastructures it is an ideal route for motorcyclists. In this regard, the Ruta de la Plata is one of the most complete and varied routes that can be explored on a bike. Thanks to the southern climate, you can ride the route 365 days a year.

We did it in May on an MV Agusta Turismo Veloce equipped with the Bridgestone T32. The perfect bike for this route on the perfect tyres. The Ruta de la Plata includes old and original parts of the ancient route, but one can also choose more modern itineraries. Fast flowing highways, mountain passes, or gravel roads are great options. We did all of that, starting in the great city of Gijon. Situated on the Atlantic coast, Gijon is not your typical Spanish city. It’s green, gets a lot of rain and all in all, there are not a lot of tourists.

Leaving Gijon presented us with an immediate dilemma: taking the easy road trough Oviedo or staying right of the city and take the more challenging route through the Redes Natural Park. It’s one of the benefits of the route: there is no obligation to stay on one and the same road. A biker’s passport allows you to check in at several waypoints along the road and you also get reductions in many hotels and restaurants.

After a rainy and misty start in Gijon and some quite low temperatures in the mountains, the weather turned around once we passed Leòn. From thereon, it was warm and dry. Just as you can expect during summer in the center of Spain. After 300 km and too many photo and coffee stops, we stopped in Zamora for our first night along La Ruta. As is the case all over Spain, the food and the wine were delicious, and the check was very affordable. Gijon-Zamora was a great first day.

And the second day promised to be even better, as we had planned stops in Salamanca and Guijelo. We reached our first goal in little less than two hours, following the easy going and fast N66. It felt good to be able to open the throttle on our MV Agusta Turismo Veloce and enjoy the high speed stability of the Bridgestone T32. One day before we were amazed about the grip in the rainy mountains, now we enjoyed the feedback and balance at high speeds. It’s great to travel on tyres you trust 100 percent.

Salamanca is one of the most Spanish cities in Spain. It’s hot, it has loads of history and magnificent buildings. As any good tourist should do, we looked for the famous frog of Salamanca (which turns out to be a toad, by the way) and drove around to see many of the famous architecture. If it hadn’t been for the scorching heat, we might have stayed longer. But Guijelo was calling. That may not seem like a big deal for most people, but if you know this town is the center of the Pata Negra industry, you know this is a must visit for every non-vegetarian. We once again stumbled on great and affordable food, but this time added some rather expensive jamòn to our order. Iberic ham is know all over the world, and the Pata Negra is the best of the best. The name refers to the black hoof of the local pigs and the meat is one of a kind.

Happy with our lunch and the two hams we bought, we continued along one of the most challenging parts of the route. Not because of mountains or rain, but because we chose the option to ride along a few of the original trajectories of the Ruta de la Plata. Cobblestones and dusty trails led us from Guijelo to Cacerès, a Unesco world heritage town in the heart of Extremadura. The old town center is a must see, but only if you are on foot. Even on a motorcycle it is very hard to get in to. We tried to find a hotel, but none of the hotels that had vacancies, could give us a spot to park the bikes. In the end we chose to ride out of the town center where we easily found a hotel, ate a cheap pizza and fell asleep as soon as we arrived in our rooms. The combination of 12 hours on a bike and the Spanish heat is a guarantee for a good night’s sleep!

All terrains conquered thanks to the T32

Well rested and curious for what was about to come, we started the last day. Heading towards Sevilla and once more ‘enjoying’ the heat; we were starting to get used to riding the Ruta during Summer. We made a quick stop in Sevilla but arriving in a busy town with many tourists was quite the opposite of what we had experienced during the previous days. So, we got out of the Andalusian metropolis and took a last short ride to the lovely town of Carmona. The perfect spot to end a three-day journey on one of the most impressive trajectories in Europe. The mix of Spanish culture, diverse roads and great food made this a memorable trip. We were lucky to be riding on the T32, because this tyre was a perfect match for the variety of surfaces you encounter on this type of endeavor. Wet or dry, fast or slow, clean or dusty: the T32 was outstanding during these three days of riding. With no worries about our tyres or the bike, we enjoyed this trip to the fullest. And because there are so many options for riding the Ruta De La Plata and we still have our motorcycle passport, we plan on doing it again sometime soon. See you there?

The numbers of our trip on the Ruta de la Plata

31 hours on the bike