The past FIM EWC season was again an exciting championship in which both the motorcycles and riders were sorely put to the test in races lasting from 6 hours to 24 hours.

The 2021 season comprised of four rounds in France, Portugal and Czech Republic. From June to October 2021, the FIM EWC took place on prestigious tracks like the Bugatti circuit at Le Mans and the Paul Ricard circuit at Le Castellet in France.

To wrap up the season, we’ll give you the highlights for each race. One thing is for sure: it was again an exciting year for the Bridgestone title contenders, teams, riders and fans around the world.

Conditions were ideal at Le Mans in June and the 24 Heures Motos lived up to expectations with a hard-fought race between high-class Bridgestone competitors. The first half of the race was dominated by an epic head-to-head between Yoshimura SERT Motul and YART-Yamaha, which ended in mechanical issues for YART. From that point, last year’s winning team F.C.C. TSR Honda France looked to be a contender for second place, but hopes were dashed when an electrical fault prevented the machine from fighting for the podium.

The #1 Suzuki of Yoshumira SERT Motul was first to cross the finish line of the 44th 24 Heures Motos on Sunday 13 June. Riders Gregg Black, Xavier Siméon and Sylvain Guintoli claimed victory after an eventful race at the Bugatti Circuit Le Mans in France. This is Suzuki’s 13th triumph at the 24 Heures Motos, the last of which was in 2015.

The racing season started with a bang. The next race took place on 17th of July in Portugal: the 12 Hours of Estoril.

F.C.C. TSR Honda France started the 12-hour race in fourth place with Di Meglio and after the first three hours of the race, the team were already sitting in third position. Thanks to consistent stints by the riders of the Honda #5, the Japanese team managed to move into second place by half race distance with consistently fast lap times. In the last 50 minutes of the race, Hook did the final stint and took the Fireblade #5 on Bridgestone tyres to the victory, taking the checkered flag one lap in front of the Kawasaki team.

Honda’s endurance specialists, Josh Hook, Mike Di Meglio and Yuki Takahasi fought hard and with consistent race pace they took the win despite the hot conditions. The win resulted in 46 valuable points, which moved them into second place overall in the 2021 FIM Endurance World Championship standings with a total of 82 points.

The third and next round of the FIM EWC Championship took place on 18 September, with the legendary Bol d’Or at Circuit Paul Ricard in France.

With the scorching heat at the start and heavy rainfall during the night, the 84th Bol d’Or was one of the toughest in the race’s history for both the riders and the bikes. After 24 hours of racing on the Paul Ricard circuit, only 20 machines crossed the finish line.

Yoshimura SERT Motul led the race for 615 of the 704 laps completed. This year’s edition, the 84th, broke the previous record of 698 laps completed in 2018. Gregg Black, Xavier Simeon and Sylvain Guintoli battled the other contenders heavily in the early laps but rapidly took control of the race. Eventually the factory Suzuki team – the reigning champion and winner of the 2019 edition of the Bol d’Or – won a brilliant victory at the Paul Ricard Circuit.

The 2021 Bol d’Or also marked the return of the public for the first time since end-2019. 48,000 spectators were at the Paul Ricard circuit this weekend. It was a wonderful sight to see the crowd return to this legendary race.

3 races down, one race to go. The last race of the season was the 6 hours of Most at the Autodrom Most Circuit in Czech Republic.

The 2021 season confirmed the superiority of the Suzuki brand in the FIM EWC. With two dominating victories at the 24 Heures Motos and the Bol d’Or 24 Hours in France, the official factory team started the fourth round, and season finale, with a comfortable lead in the championship standings.

The excellent and smooth work throughout the race resulted into a strong and comfortable third position. In doing so, they won the 2021 FIM EWC title in convincing style with a total of 175.5 points.

Team riders Gregg Black, Xavier Simeon and Sylvain Guintoli raced the factory GSX-R1000R with Bridgestone tyres to Suzuki’s 17th EWC title by finishing third in the fourth and final round of the series, the 6 Hours of Most, completing a total of 212 laps.

What a thrill. What a season. The 2021 season was characterised by ups and downs, victories and disappointments, but mainly by a lot of excitement! Thanks to all the teams, drivers and fans for making it another unforgettable season. See you next year!

Do you want a short overview of the rankings? Scroll down. 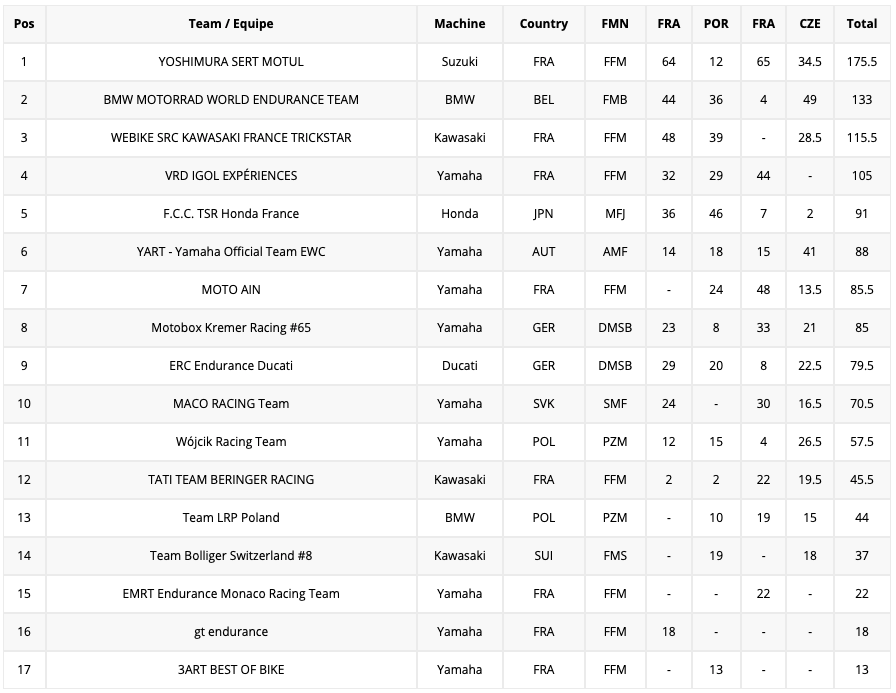 Whilst there might have been drama and heartbreak, it was a dominant win for #33 Team HRC in 43rd Coca-Cola Suzuka 8 Hours with...
Read more
Racing news

There was non-stop action and drama when the FIM Endurance World Championship returned to Circuit de Spa-Francorchamps for the first time in 21 years...
Read more
Racing news