Dakar Legends Trail: Back to the roots

Riding a 42-year-old Yamaha XT500 and a 42-day-old Ténéré 700 from Paris to Dakar. The simplest ideas are often the best, aren’t they? 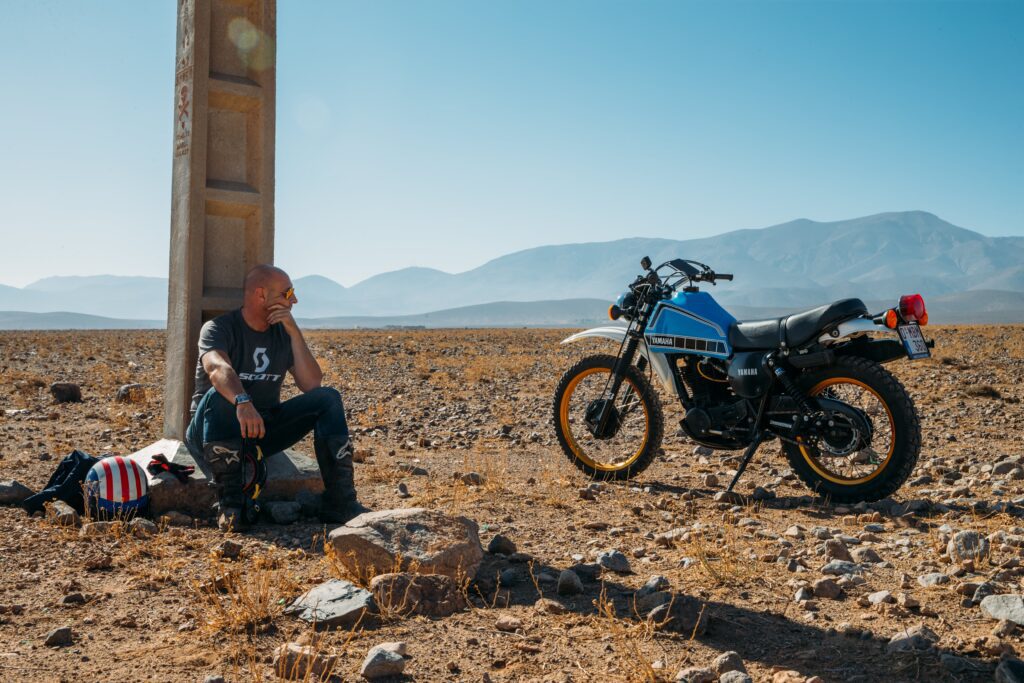 Motorcycle travel is among the purest forms of travel. It’s only in the last century or two that people have been traveling in metal-encased vehicles. Cars, planes, trains, and buses seal off travelers from the outside world. On a bike, you are in direct contact with the elements and the local population. Moreover, one never stays too long in one location. You rarely see a motorcycle parked at an all-in hotel, do you?

The superlative of ‘motorcycle travel’ is ‘adventure travel’. Riding through a desert, heading for some cape or reaching a mythical place. We combined all three and rode – inspired by the original Dakar Rally- to the mythical Lac Rose, the classic arrival point for The Dakar. And we did it with the model that won the very first Dakar back in ’79: Yamaha’s XT500. Flanked by the most recent evolution of Yamaha’s adventure bikes: the Ténéré 700 Rally. A 42-year-old bike and 42 days old one. Smart move?

Simple, but not easy

In part one, we already covered the preparation and gave some more details about the plan. This story starts at the eeehhh…beginning. After a short and obligatory stop in Paris, we headed for the African continent. Sounds easier than it was, because due to squabbles between Spain and Morocco, all ferry traffic between the two countries got cancelled. So, there was no other option but leaving from the harbor of Marseille before the engines made their first meters in Tangier. Morocco conflicts with quite a few countries. The border with Algeria has been closed for decades and the border with Mauritania recently got closed too. Is Morocco isolated? In a way it is. And in any case, it’s a pity for all those who want to travel through it. Because the country is simply the gateway to the western half of black Africa. 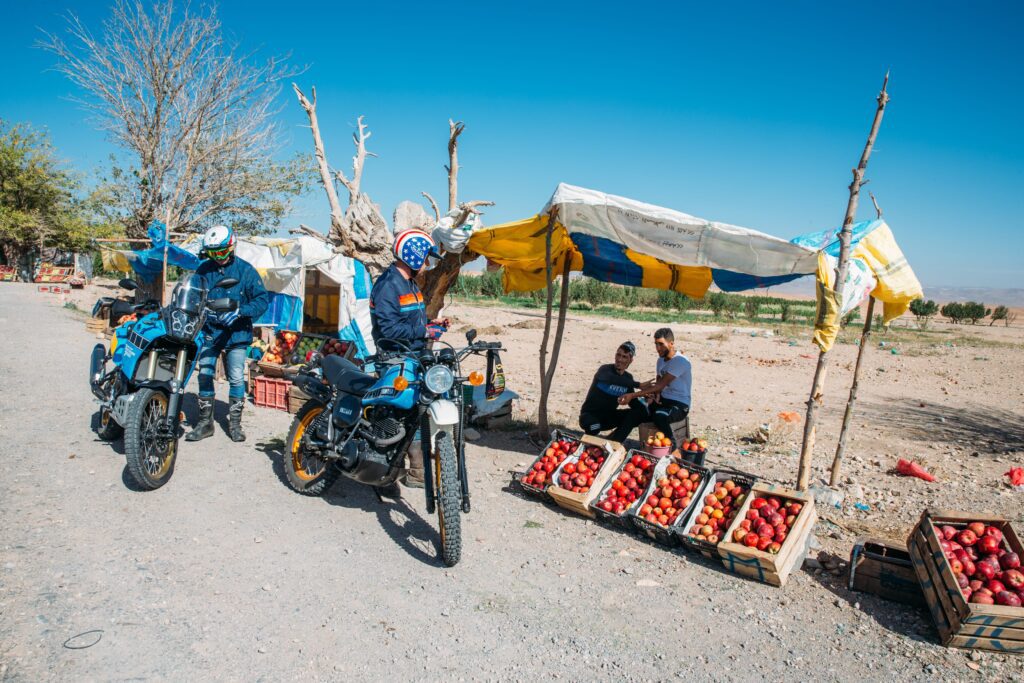 As the African city closest to another continent, Tangier has a rich history. It’s important not to dwell on that, because once you start, there’s no end to the tales and historical facts. There is no other place in the world where the difference in a few kilometers is bigger than on both sides of the Strait of Gibraltar. It is a shock geographically, culturally, religiously, and humanly. After all, Tangier is also the place where the journey ends for countless Africans hoping to enter Europe via the Strait.

From Tangier we drove to one of the other big cities, Casablanca. Not exactly a stage to look back on, because it was flat and rather boring. But it was a necessary stage. The long winding roads gave us a good feel on how the new Bridgestone AT41 was behaving. Sharp handling and great feedback from the front tyre were the first impressions. Later we would be amazed about how well the tyre behaves on gravel and in the end, we were surprised by the lack of wear on the tyre.

After almost 4.000 (rough) kilometers, the AT41 rear tyre still looked quite fresh.

Even though the ride to “Casa” – as the Moroccans call Casablanca – was rather sedate, it also gave us time to get used to all the new stuff and… the XT500. We had had little or no time to thoroughly test the Yamaha classic. We did a short ride through some fields, had the Acerbis tank painted, mounted a set of Bridgestone AX41s and…that was about it. Understandably, the confidence in the XT at the first meters in Africa wasn’t sky high. During those first hours, we were afraid that the engine would stall, overheat, or not start again when we stopped. None of those things happened.

The XT behaved amazingly in Morocco. As a mile-eater on the sometimes long stretches of asphalt and as a desert rat on the scorching hot slopes. Not once did the air-cooled mono get too hot, not once did we find ourselves at the side of the road with a breakdown. The XT turned out to be a faithful companion. One we often think back to.

Which doesn’t mean that there were no problems. And the problem with problems in Africa, is that they quickly develop into tragedies. Believe me, bad luck in the Sahara feels different than bad luck on a European highway.

Solutions for (almost) anything

For example: on a track between Merzouga and Zagora we lost the license plate. Not very convenient if you’re planning to cross the Mauritanian border. To make matters worse, we only noticed this when we stopped on the outskirts of Zagora to spend the night. Fortunately, we arrived quite early that day, say about 6 pm. What happened then was a textbook example of efficiency. We looked at the camera footage we took from the Ténéré 700 and were able to determine exactly where the license plate had been flung off the XT. We then returned 80 km in the desert and … found the plate exactly where we hoped it was.

Later in Zagora we were able to get some new bolts for the exhaust that we lost because of vibrations at Iriki’s Garage. The place is quite famous among desert travelers, and it was once owned by the lamented Mohammed Gordi – Fat Mo for the friends. They even set us up with a new button for the indicators. If the bolt of the head light had come loose a day earlier, we would have replaced that at the same time too…

The days between Errachidia, Merzouga, Erfoud, Zagora and Ouarzazate were physically the most demanding. The stop at the Gara Medouar, a rock formation formed by water, millions of years ago, served as a prison for the black slaves who were transported to Europe by the Portuguese in the 1800’s. The cratered rock mass also served as a backdrop in the Bond film Spectr and is also featured in The Mummy. Anyone who is ever more or less in the area should absolutely go there. For those who want to, the place can also be reached by car, a well-traveled track of about 2 km connects the national road with the Gara Medouar. We ended up spending almost half a day there, taking ample time to make the necessary photo and video material.

The desert in southern Morocco is dazzlingly beautiful. Every now and then it is mouthwatering to see the ever-changing landscape and a grandeur that cannot be captured in photos, let alone in words. 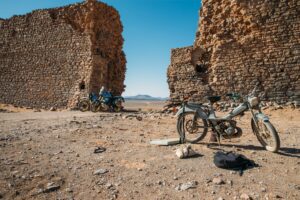 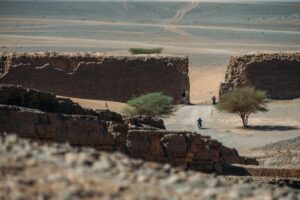 The scorching heat in the desert also made us decide to adapt our dress code. Or rather, to cancel it. Responsible behavior? Not at all. But a logical choice. Jeans and long-sleeved T-shirts don’t belong on a motorcycle, but neither does fainting. It was a conscious choice. And we ended up riding an XT500 from ’79 and in those days, everyone rode around in such an outfit. Even Steve McQueen on the Elsinore. And if Steve thinks it’s ok…well…

And so, the ode to the old Dakar immediately became a crusade in jeans. Sounds like a title for a novel. But it was full-on driving and enjoying. But with a few less rules now and then. Without actually realizing it, this was something we needed. It felt like an escape from the many rules we deal with in Europe. Little did we know then that it would be rules and administrative unwillingness that would later cause quite a bit of problems at the Mauritanian border… 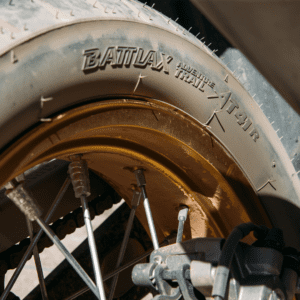 Before that happened, we kept our focus on Agadir. With a satisfied look at the tires too because after almost 3000 km the Bridgestone AX41 all road tires were still in surprisingly good condition. Even the grip of this knobby tire on asphalt surprised us in a positive way. We even passed the 4×4s of the Rally Aisha des Gazelles on a track between Merzouga and Zagora with the XT and Ténéré 700. And the Ténéré was on the AT41. Even though it is not an off-road tyre, it can handle a fair share of rough terrain. The truly amazing part was on the road. The comfort, the handling and the wear were better than we could have even dreamed of. With its smooth power delivery, the Ténéré 700 is not a real tyre eater, but nevertheless, after 3.000 km the AT41 rear tyre looked almost new. Impressive stuff…

So. Agadir. The Las Vegas of Morocco. A turning point in the journey, because: you reach the Atlantic. Moreover, it is always nice to visit The English Pub. Too bad it was closed due to Covid restrictions. No problem, in Agadir there are plenty of establishments where you can order a fresh pint. We really enjoyed that after a week of alcohol-free drinks and sand eating.

The first major part of the trip was over with the arrival in Agadir. Ahead of us, was one long straight line to Dakar. First on tarmac, in the half autonomous region of the Western Sahara you should not deviate too much from that road. 1200 km to the border with Mauritania and then another day or so to the border with Senegal.

The least exciting part but also the part with two border crossings. Everything that follows after the border crossing at Rosso, is worth all waiting and negotiating at the borders. After Rosso lie the beaches and sandy slopes of the Sahel in Senegal, with as apotheosis the arrival at Lac Rose. Especially that prospect worked like a magnet on us, lonely travelers.

It was great to get to Agadir, but we couldn’t wait to get going again.

Excited to read the second episode? Keep an eye on our social media platforms and Gripping Stories!

Parts one and two of this epic trip to Dakar told how we crossed large parts of the Sahara, rode along the Atlantic through...
Read more
Travel inspiration

Riding to Dakar again. It was a goal I had been envisioning since we first drove to the Senegalese capital in 2011, following the...
Read more
Travel inspiration

Any motorcycle enthusiast will agree: sunny autumn days are exciting times to be on the road. There are many countries and roads with twists,...
Read more
- Advertisment -