Riding to Dakar again. It was a goal I had been envisioning since we first drove to the Senegalese capital in 2011, following the footsteps of the original Dakar rally. The plan was simple: to complete the trek once more every 10 years. As I write these lines, it seems terribly long to wait another decade to head back to Dakar. Besides, with one chance per decade, the number of times one can make this dream trip becomes quite limited. This is part two of The Dakar Legends Trail! 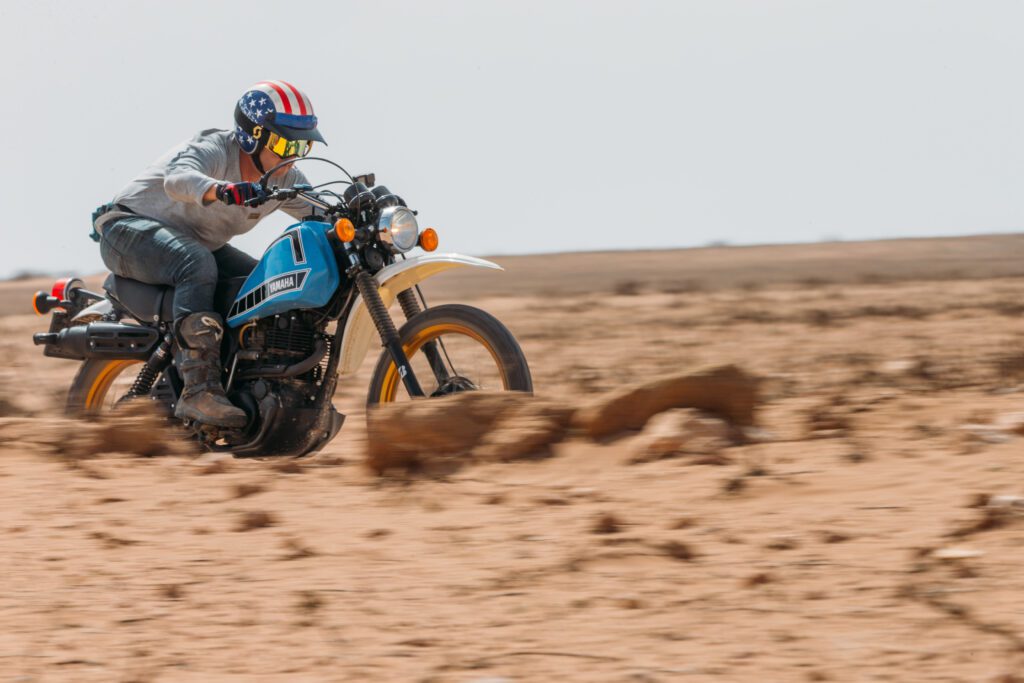 Riding through the desert is addictive. And soothing at the same time. The physical fatigue you feel afterwards is dwarfed by the mental peace you get on the African slopes. Riding to Dakar can actually be divided into four major parts. The European part is no more than a warm-up and for those who choose to drive along the freeway, it’s almost a waste of time. Moreover, once in Africa, you have to change tyres. Knobby tyres and highways… it has never been a good match.

Part two of this trip is the exact opposite. Morocco is breathtakingly beautiful and a paradise for off road and adventure riders. Even those who rarely – if ever – leave the asphalt, will be impressed by the ruggedness of the Atlas Mountains, the grandeur of the Sahara and the beauty of the Atlantic coast.

Then comes part three: once you pass Agadir, it’s basically a straight line down. Western Sahara and Mauritania are almost 2500 km of patience. True, you’re on a motorcycle, but the landscape after Agadir doesn’t change until you’re a few km from the Senegalese border. And there is a clear point where you can verify that change: suddenly there’s a tree in the desert. And then another one. And then a lot. Suddenly you are at the banks of the Senegal River and the border post with Rosso. 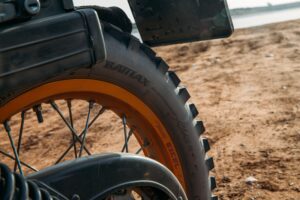 But let’s not get ahead of ourselves. We hadn’t reached that point yet. If you read the previous part of this story, you know that we had arrived in Agadir with surprisingly few problems. We didn’t know what to expect from the 42 year old Yamaha XT500 crossing a hot desert. Well, the engine didn’t miss a beat, neither in extreme temperatures of a lot more than 40 degrees, nor during long connecting stretches where the big single had to thunder over the asphalt at a constant speed of 100 km per hour.

Great performance of the Bridgestone AX41 helped us a lot. The tyre is great on the road, outstanding in off road use. And we were surprised on how low the wear on this knobby tyre was.

However, no matter how well the XT performed, long asphalt stretches are not its favorite part. On the off road parts, the descendant of the first Dakar winner felt much better. Nevertheless, you still have to throw your modern off road techniques overboard to race the XT500 smoothly over slopes.

The bike is so small, standing up is always a bad idea. For your back, for your legs and simply because you just get tired. While you can stand up and relax a bit on a modern adventure bike or off road, you can’t on the XT. Especially if you use the original suspension. In this case you are crossing a desert with pretty much the suspension travel of a skateboard. You learn to sit down as much as possible and to get out of the saddle only when you really have to. In the saddle, you have an additional advantage: the thickness of the seat padding helps to absorb some of the shocks. Unsurprisingly, most of the old Dakar photos show riders sitting down.

In a straight line 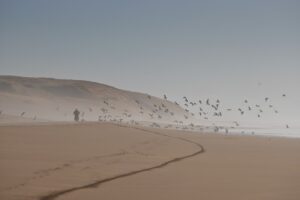 Once past Agadir, we opted to stick to the wonderful sandy tracks that lead you via Sidi Ifni to the Plage Blanche as much as possible. Coming from Guelmin, the famous and impressive beach is almost an obligatory stop. After this, the road to Dakar takes you towards El Layoun and Dakhla. Not too much off road here, just a long and winding road.

If you want to gamble that there are no police officers with speed guns waiting behind the rocks, you can storm south at 160 km per hour. Smoothly. Well, you can if you are on the modern Yamaha T7. The XT is not a fan of high speeds. The Ténéré 700 proves that adventure riding also means travelling and, consequently, covering kilometers. While in the Moroccan part we occasionally enjoyed keeping up with the Ténéré 700 with the XT, once we entered the Western Sahara, there was no way to do that.

To reel off miles, the Ténéré 700 and the Bridgestone AT41 score surprisingly well, the XT500 predictably poorly. This is not a bike for the long highways. Or even the short ones. But it was part of the game, part of the challenge of riding this adventure with this bike.

And, oh yes, singing in your helmet helps. I’ve no idea how many times we sang Metallica’s (or rather Bob Seger’s) Turn The Page in our helmet. “On a long and lonesome highway, east of Omaha…” “On a road to nowhere” by Talking heads, echoed countless times out of our throats just as well. It’s pretty annoying, by the way, when you don’t remember a piece of the lyrics and you really have to hum parts of the song. But it does help to grind down the kilometers.

This drive between Tan Tan and Dakhla is the longest and the most tedious of the entire Dakar route. There are not too many stops and it is a very simple and boring road. Counting down kilometers is part of this trip and you know that you will just have to face this part. But still, it sucks. However, reaching Dakhla makes everything worthwhile. Not because of the city as such, but for the landscape around it.

Dakhla is situated on a peninsula and the shallow waters around it attract surfers from all over the world. Because you shouldn’t even send surfers over that boring stretch, there’s an airport in Dakhla. Covid made sure there were significantly fewer windsurfers on the shallow waters in Western Sahara, but it’s still a crazy sight. Almost 1000 km of nothing but sand and rocks and then suddenly colorful sails and kites. However, this is not the best thing about Dakhla. Just outside the city is an almost literally unearthly landscape. Sometimes it feels a bit like riding on the moon. Striking white sand, lots of hard stretches, crazy rock formations… It’s a strange piece of planet, just outside the last town before the Mauritanian border. 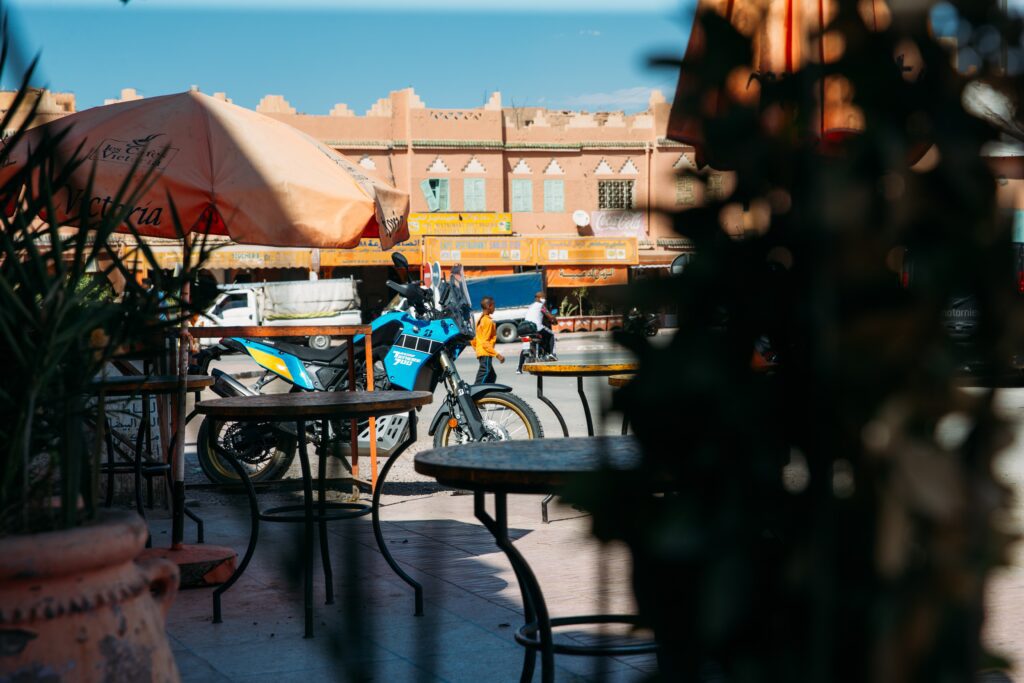 But watch out. Even though this is the last major town before the border, in Dakhla you are not at the border at all. There’s still a 350 km ride before you reach the impressive border post with Mauritania. Between the Moroccan part and the Mauritanian post, there is a 5 km long strip known as No Mans Land. The borders of the two countries don’t touch there. There are plans to cancel this much-discussed patch of land to which everyone has a claim, and have the borders simply connect like almost everywhere else in the world, but we’re not there yet. And as it turned out: we weren’t in Dakar yet either.

We got more acquainted with the Moroccan border post than we wanted. That’s because we were stuck there for four days. Worse than the days were the nights, spent in the only hotel in the area. Imagine a dingy building, with wooden benches and all sorts of rodents running through your room and all over your smelly blanket every night. Well, that would still be better than a stay in the minus-five star hotel near the border. The reason for the delay? Lame excuses and a strange policy of Morocco.

Initially we were told that a stamp was missing on our customs papers. Crazy, because when the ferry arrived in Tangier, everything got nicely stamped. The bickering and waiting lasted a little over a day and a particularly long night. Finally we got the news that the customs office in Dakhla could provide us with that necessary stamp. Yes, Dakhla, which is almost 350 km from the border. So, we went back to Dakhla, only to be told that all our papers were in order. Back to the border we went – not without spending the night in a real bed – to hear, believe it or not, that this time a document was missing. Yes, back to Dakhla. Only to be told that, as I said last time, all our papers were ok. So once more we rode 350 km back to the border, where we offered the customs officer an amount for which he had to work for more than half a year (customs officers earn about 150 euros a month there). At that moment, we were promised that we could get our van – with the bikes in it – across the border. Because it would be transport and not travel. Meaning one driver, the van and the two bikes. Not how we planned it, but it looked like this was the only option to get to Senegal.

Excited to read the third episode? Keep an eye on our social media platforms and Gripping Stories!