There is no doubt that history contains many magnificent motorcycling moments. Perhaps you are now spontaneously thinking of a specific moment. In our new blog series Bridgestone moments, we would like to take you on a trip down memory lane. Are you ready to relive a series of great stories that detail some of the most memorable moments in motorcycle history, in which Bridgestone played a significant role? Sit back, relax and enjoy these epic throwbacks.

Relive the amazing Motocross of Nations in Italy where Johnny O’Mara made history on Bridgestone tyres. 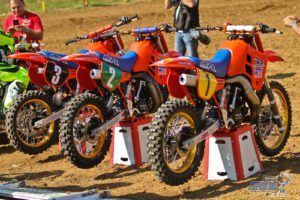 The Motocross of Nations (MXoN) is widely considered to be the Olympics of motorsports. It’s not about individuals winning a world championship, it’s a competition between national teams, to determine which country has the best motocross riders in the world.

The event has been on the calendar since 1947, but the 1986 Motocross of Nations would go down in history as the most memorable of them all.

The United States had been the dominant force in the MXoN since they first won the event in 1981 in Belgium. Team USA would win the event 13 times in a row and totally dominated the eighties. The race in Maggiora, Italy, still stands out as the most spectacular one.

Motocross of Nations; how it worked

The 1986 MXoN was the first to use a new format. Every country could send three riders. One for each category of the time: 125cc, 250cc and 500cc. Each rider would compete against riders from one other category. Meaning there was a 125-250 race, a 125-500 race and a 250-500 race. These races had the world’s best riders competing against each other. Of course, the bigger bikes had power advantage over the smaller ones. That’s why every category got a separate classification. If a 125 finishes eighth in the 125-250 race, but as the first 125, this meant the rider got the class win.

The highest level of motocross

Team USA’s Johnny O’Mara knew it would be impossible to win the overall classification in Maggiora. He was lining up against seven world champions from different countries. On top of that his teammates David Bailey and Ricky Johnson were considered the fastest riders on the planet. Still, O’Mara was on a mission. He knew this would be his last race on a Honda. The brand he had been riding for since 1980 had decided to let him go for 1987. Johnny “O’Show” O’Mara wanted to prove to Honda that they made the wrong choice. 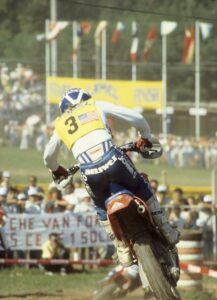 All three US riders were on Hondas, but O’Mara was the only rider on on the team with Bridgestone tyres. Maybe this was one of the things that gave the O’Show the ability to come from a second row start to fourth place in the first corner, competing against the 250s in the first race of the day. A few laps later, O’Mara’s Honda CR125 was in second place, just behind his teammate and US Supercross and 250 cc champion Ricky Johnson. “With the two of us at the top of the race and a gap of almost half a minute to third spot, I thought we could take it easy,” Johnson remembers. “But that never happened, Johnny never backed off, he kept pushing me to the finish.” The crowd of over 30,000 fans were amazed. O’Mara had just beaten the best riders in the world on a bike with half the engine capacity. 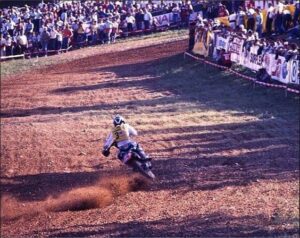 Surely in the next heat, the 125-500 race, O’Mara would struggle more. Not only would he be competing against 500cc bikes, reigning world 500cc champion Dave Thorpe would also be there, as well as ex-world champs like Georges Jobé, Eric Geboers, Hakan Carlqvist and Heinz Kinigadner. Thorpe got the holeshot, David Bailey, USA’s 500 rider was second and Johnny O’Mara took the first corner in around 15th place. Not too bad, with a 125 and starting from the second row. The next half hour had history in the making. Bailey blew by Thorpe after two laps. Eight laps later, O’Mara had battled through the field and he was in fourth. Behind Jobé and Thorpe. First Jobé made a mistake, letting O’Mara slip through. And then one of the most historic passes ever took place. O’Mara jumped his Honda CR 125 past Dave Thorpe’s Honda RC500M works bike. Un-be-lie-va-ble. It was a one-two finish for the US again, but the fact that the 500 cc world champion had been passed for second place by a rider on a 125cc motorcycle, was more impressive than the perfect score of Team USA. The O’Show had completed his mission.

The perfect score, remembered as the fastest ride on a 125cc MX bike in history

To make things even better, Bailey and Johnson made it a one-two finish again in the last race. Nobody was surprised by the fact that the USA’s dream team won the race. It was the way this happened, that blew everyone’s mind.

Ironically enough, the dominant three would face difficult times after their moment of glory in Italy. Maggiora marked the end of an era. Shortly after the 1986 MXoN David Bailey crashed and would never race or walk again. Ricky Johnson had some good years ahead but then got a wrist injury that ended his career. And after Johnny O’Mara moved from Honda to Suzuki, he never reached the level of his Honda years again. But the way he rode on that sunny September day in Maggiora, will always be remembered as the fastest ride on a 125cc MX bike in history.

Check out the video of team USA’s Dream Team in Maggiora 1986 here.

Imagine: You’re standing in Punta Skala (Croatia) with the most amazing, exquisite collection of classic motorcycles you can imagine. There are twins, triples, four...
Read more
- Advertisment -