Whilst there might have been drama and heartbreak, it was a dominant win for #33 Team HRC in 43rd Coca-Cola Suzuka 8 Hours with the line-up of Tetsuta Nagashima, Takumi Takahashi and Iker Lecuona taking the chequered flag by over a lap in the third round of the FIM Endurance World Championship. The #33 CBR1000RR-RSP was peerless throughout the eight hours and save for a brief dice at the early restart, there was little doubt of who was favourite barring the unexpected. In the end Bridgestone locks out the top 10! 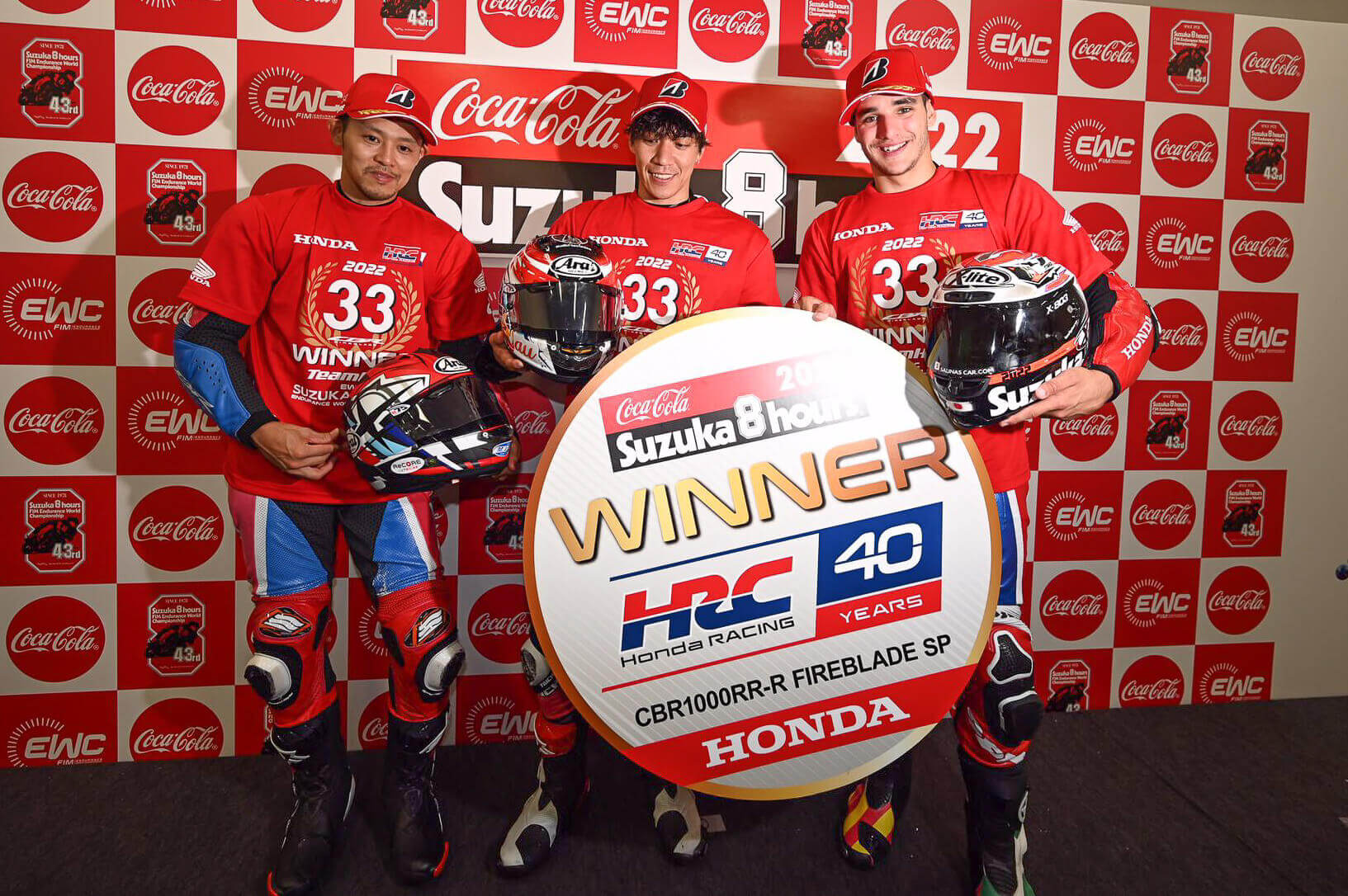 The first hours of the race

The Suzuka 8 Hours start came with rather surprising blue skies after a build-up week of alternating grey hazy humidity or rain, the heavens seemingly cleared ahead of the race. The HRC led the field away cleanly, but behind it the top qualifying permanent EWC-entered #7 Yamaha YZFF-R1 had a shocker, down as low as 25th with Niccolò Canepa giving himself plenty to do, in complete contrast to Gregg Black on the rival #1 Yoshimura SERT Motul GSX-R1000R, who had a stormer, up to fourth on track on the first lap.

No sooner was the first lap done than the safety car was out for the first time after Kosuke Sakumoto on the #17 Astemo Honda Dream SI Racing CBR1000RR-R took out Naomichi Uramoto on the SDG Honda Racing version of the same bike heading into T13, providing an unlucky race exit for both with their teams’ dreams of glory turning into an instant nightmare.

The Honda NSX was followed first by the #33, then the #5 F.C.C TSR CBR1000RR-R Fireblade with Josh Hook riding the opening stint, from the #10 Kawasaki Racing Team Suzuka 8H ZX-10R with Leon Haslam on start duties, then the SERT, followed by the #37 BMW MOTORRAD WORLD ENDURANCE TEAM M1000RR.

With the safety car back in, it was an early tussle for the lead with Black, Takahashi and Haslam all dicing after the restart before the HRC was back to the place that its pace dictates and started to stretch out a lead.

With the early banter over, strategic considerations could soon be put into question: who would pit first of the frontrunners? Answer: YART. Canepa had done a fabulous job to redeem his tardy start, up to tenth by lap 10, seventh a lap later, and into third position by lap 14.

By lap 26, the YART was in, with Canepa swapping for Marvin Fritz and so the first stops ensured. The #5 was next, Hook for Di Meglio, then the SERT, Black for Watanabe, but not till lap 28 was the #33 HRC in for Takahashi to swap to Nagashima.

The HRC pitting handed the lead to the #10 Kawasaki for a lap for before it pitted too. Fuel consumption considerations were now there for all to see.

Fuel consumption was not the only consideration for the season-contending #11 Webike SRC Kawasaki France team after Randy de Puniet had a low-speed drop at Degner 2, requiring a return to the pits and a 7-minute turnaround before Florian Marino returned to the track.

A second safety car came out at the two-hour mark after an off for the #51, whilst the rider was okay the bike was lightly toasted from a fire, but it was as you were at the front save for the timing and spacing of the two safety cars which are deployed at Suzuka. The #10 Kawasaki got picked up by the second one thus handing the Honda yet another advantage.

As the final hour started to tick by, so a rear tyre change took longer than wanted, before Fritz headed out for his final stint, but soon there would be consternation as the German got caught up with the #74 Akeno Speed – Yamaha Superstock bike at T13 such that both ended up embedded in the air barriers. As well as Fritz having to dig his Yamaha out of said barriers, the team would also have to make repairs to the R1 and serve a penalty too.

It was Hanika out for the final stint on the repaired Yamaha, with the ride through still to be served, with the squad losing out on the permanent EWC race lead to the #7 Suzuki as well as losing the prospect of the overall podium.

“Obviously, I am disappointed, but I am also very proud of the whole team. We do not have as many resources compared to our factory rivals, but we were right up there at the front all week.”
– Team Manager Mandy Kainz

Leaving Suzuka, YART remain third in the overall standings with 93 points, 34 points behind the leaders, but the late issue for the #7 gifted the championship leading #1 bike maximum series points and third on the overall podium. Not bad for a squad that twice changed rider line-up and qualified 22nd on the grid.

Black, as mentioned, had made a stunning start from 22nd up to contending the lead, but the Suzuki pair weren’t quite able to match the pace of their rivals in the middle section of the race even if they certainly were close enough if disaster struck.

“An incredible result to score some great points for the championship” said Black afterwards.

Ahead of the Yoshimura SERT bike on the all-Bridgestone shod podium was the #10 Kawasaki Racing Team Suzuka 8H ZX-10R of Jonathan Rea, Alex Lowes and Leon Haslam, with a T12 slow lowside for Rea in the fourth hour seeming the only real cause for concern over the 8 hours even if the safety car placing was cause for frustration.

The #10 KRT entry had been in a battle with the #7 Yamaha with the #7 having more race pace, but greater fuel consumption, and the KRT losing out in the second safety car appearance which split the KRT from the leading team. Later, approaching the halfway mark a small lowside from Rea, while trying to pass two slower riders in his effort to trim the leaders’ margin, lost some more seconds that proved to be impossible to make up again before race end. 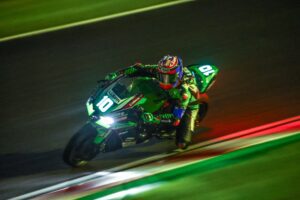 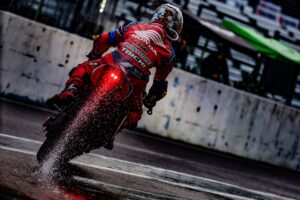 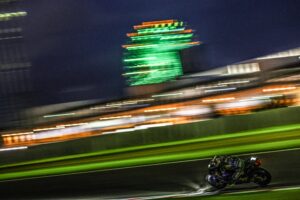 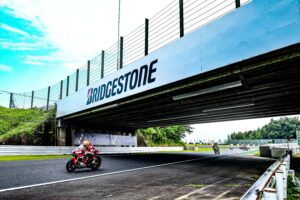 Next across the line of the full season contenders, the #5 F.C.C TSR team with Josh Hook and Mike Di Meglio in action had fought back up the order after an early brake master cylinder change, further brakes and exhaust issues to finish in tenth overall and retain its second place in the provisional World Endurance Championship standings.

The squad, down to two riders due to the hospitalisation of Gino Rea, saw Hook make a strong start to even fight for the lead and keep in the battle come the first restart in the early running but after handing over to Di Meglio the first brake issues for the CBR1000RR-R Fireblade surfaced, meaning a long next stop for the squad as they sought to rectify. 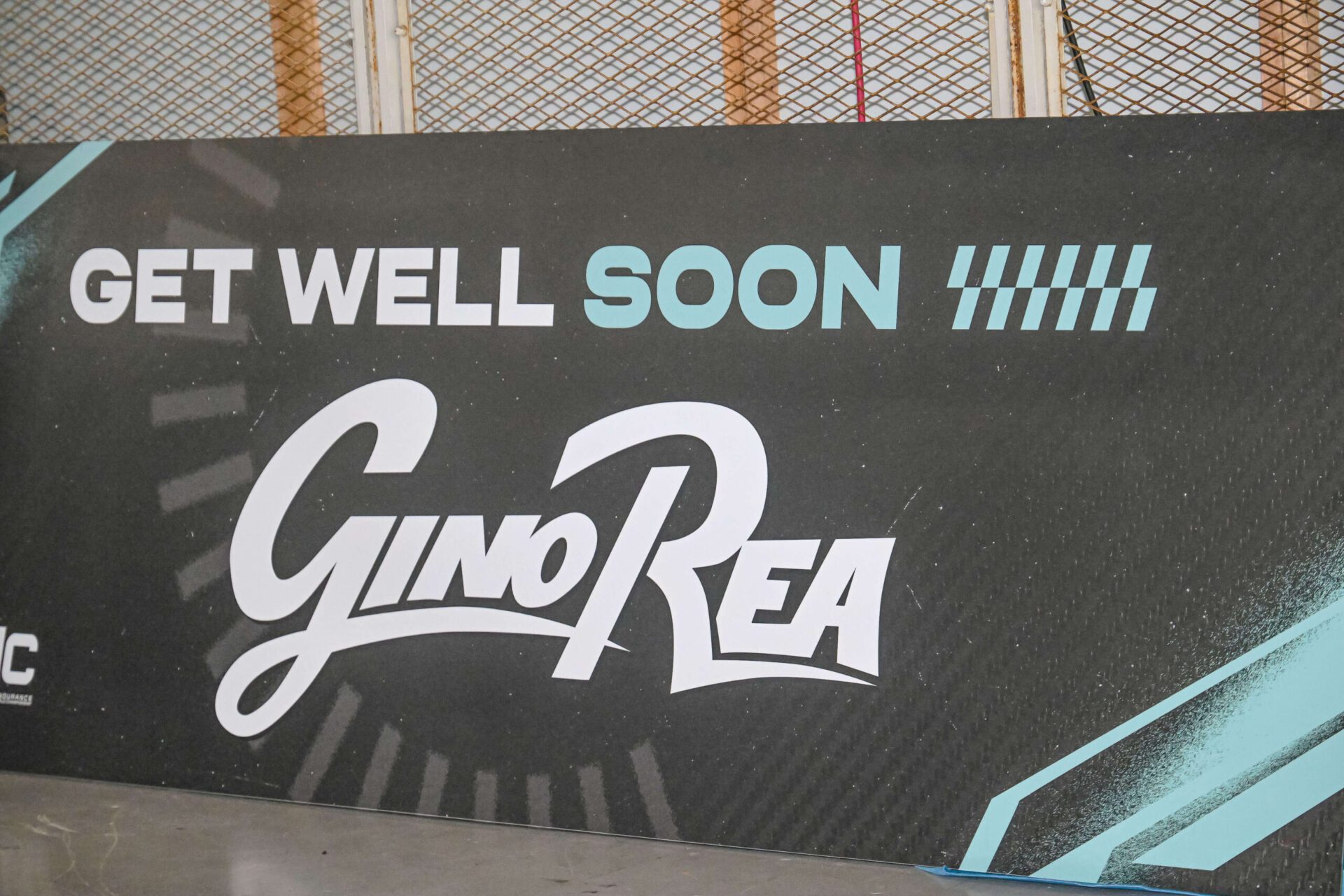 Hook rejoined down in 19th position but was yet to face a ride-through penalty before it could work back up the order to its tenth place come the chequered flag. With 13 points accrued from the weekend, F.C.C TSR Honda France kept its second place in standings, with 104 points, 23 points behind the leading Yosimura SERT.

“It’s been a very tough couple of days for us and the whole team. Firstly I’d just like to say our thoughts and prayers are with Gino. The race was very, very difficult as we had too many mechanical problems and having only two riders is quite physical so we weren’t as strong as we would have liked.”
said Hook after the race.

As well as the technical and procedural issues, Di Meglio reckoned the squad could have done with a few more horses to help their fight.

“It was a very hard race, especially because of the situation with Gino. We lacked pace and it was quite complicated to keep up with pace because here in Suzuka it’s all about power.” he said.

Bridgestone locks out the top 10!

Yesterday’s victory was Honda’s 28th Suzuka 8 Hours win and the first since 2014. It’s Takahashi’s fourth win in the event, and a first for Tetsuta Nagashima and Iker Lecuona.

The top 10 looked very bright for Bridgestone – since all the teams in the top 10 were running on Bridgestone tyres. One word: proud!