Twice around the globe, no crashes!

For 24 days Bridgestone Europe set up camp in the marvelous city of San Sebastian to host the AT41 European Press Launch. 40 journalists flew in from all over Europe to test the latest Bridgestone adventure tyre. But there is more than meets the eye at an international press launch. Gripping Stories went behind the scenes to check out what it takes to make an event like this successful. 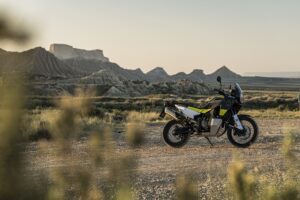 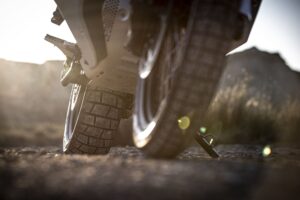 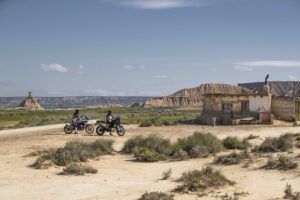 Imagine an international press launch like a giant beehive. With people going in and out all the time and things getting quite busy. How busy? Well, the proof is in the pudding, but it’s also in numbers. To get an idea of the magnitude of an organization like this, let’s have a look at some facts:

These numbers are even more impressive combined with some extra information. The goal of a press launch is always to get objective reports of motorcycle professionals in the media across Europe. That’s why Bridgestone invited 40 journalists from across the continent to attend the AT41 press launch in San Sebastian. Starting from this magnificent Spanish city, the route carried the journalists to Bardenas Reales, a half desert that Americans would call badlands. This area is a semi-desert of some 420 km2 in southeast Navarra. The soils are made up of clay and sandstone and have been eroded by water and wind creating surprising shapes, like canyons, plateaus, tabular structures and isolated hills. Bardenas Reales has no urban areas and vegetation is scarce.

Starting from San Sebastian, this meant the test riders would be traveling from the Atlantic Ocean to the desert. And back. The Ocean to desert test of the AT41 would take two days, covering 700 km on a wide variety of bikes. Bridgestone brought Honda Africa Twins, KTM 890 Adventures, Husqvarna Nordens, Yamaha Ténéré’s,… a varied selection that allowed the guests to try out the new tyre on different bikes and under different circumstances. A photo and video crew of 4 made sure everything was captured and through 4 presentations to 4 different groups, Bridgestone made sure the journo’s got all the information on the AT41 they needed. And more.

Ready for some more numbers?

Twice around the world

Before this event could even get started, Bridgestone and Ant Productions – the partners for the event – did two scouting trips, which took 8 days in total. The event itself lasted more than three weeks, and in total the crew and the journalists covered 80.000 km. That’s the equivalent of traveling twice around the globe.

That’s an impressive distance and even more impressive: there was not a single crash. Considering that the itinerary included mountain roads, highway, off road tracks and city streets, some would call it a small miracle that there wasn’t even a minor accident. At Bridgestone, we like to think the AT41 is the most versatile adventure tyre on the market. That might just have made a difference…

Watch the full behind the scenes movie!

When Gunnar's house of custom make a bike, it’s bespoke. Handcrafted to meet the needs of its owner. Now, he meets the needs of...
Read more
Adventure

AX41S - Not just pretty Scramblers and café racers are hot. But they’re also just motorcycles that want to be taken out for a ride....
Read more
- Advertisment -