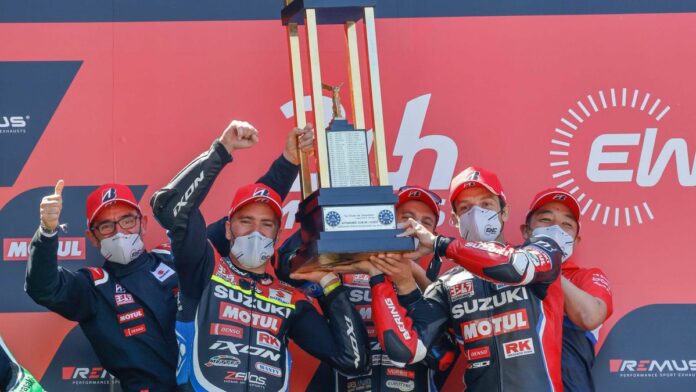 The new Franco-Japanese alliance Yoshimura SERT Motul clinched a victory in their first outing at the 24 Heures Motos, pushing the Bridgestone tyres to its maximum ability!

What a race! After 819 laps in the lead out of a total of 855, Yoshimura SERT Motul clinched a superb victory at the 44th edition of the 24 Heures Motos. Gregg Black, Xavier Simeon and Sylvain Guintoli rode the factory Suzuki 8 laps ahead of the second placed finisher.

F.C.C. TSR Honda France with Josh Hook, Yuki Takahashi and Mike di Meglio were in 2nd place overall but an electrical problem followed by a crash pushed them back to 10th at the finish.

An exciting season opener
The 44th edition of the 24 Heures Motos – the first race of the 2021 FIM EWC – lived up to its promise to be an exciting, action-packed race. The drama started almost immediately in one of the first turns with a crash involving three teams.

After that crash an amazing duel took place for the lead of the race all the way until early in the night between Yoshimura SERT Motul and YART–Yamaha Official EWC Team, both running on Bridgestone tyres. The face-off ended when a valve broke on the Yamaha.

“Suzuki is back to winning at Le Mans, a mythical race, and this is a huge satisfaction. We are at the beginning of a great adventure with Yoshimura and our association is already working perfectly. Yoshimura’s experience in 8-hour races and SERT’s experience in 24-hour races means that we can be fast and durable. The package also works thanks to Suzuki’s development work, the quality of the Bridgestone tyres and of course the consistency of our riders.”

The next FIM EWC fixture is the 12 Hours of Estoril, the 2nd race of the season to be held in Portugal on Saturday 17 July.

Have a look behind the scenes of Yoshimura preparing for the race.

The end of the year is approaching. The ideal time to look back on the past FIM Endurance World Championship racing season. Can you...
Read more
Racing news

The end of the year is approaching. The ideal time to look back on the past FIM Endurance World Championship racing season. Take a...
Read more
- Advertisment -